Exploring The Land Of The Long White Cloud - Part I

Tomorrow I will have been in New Zealand for 6 weeks. 6 weeks. Time has raced by since touching down on the tarmac in Auckland. I have travelled more than 2000 km from north to south (and back north again!), seen heaps of new species, met amazing people, and the best part - I still have 46 weeks on my visa.

Because I have managed to pack so much into my first couple of months here in Aotearoa I am finding it difficult to know exactly what to write about. Each day could have a whole chapter written about it. To make it more digestible I’ll write about the earth-shatteringly fantastic wildlife encounters which have punctuated my adventures so far in the land of the long white cloud.

The first part of the road trip in New Zealand began in Piha, an awesome little surf spot 45 minutes west from Auckland CBD at the bottom of lush hills, facing out to the Tasman Sea. There is a black sand beach that extends north along the coast away from the settlement, with an enormous rock, Te Piha (or Lion Rock) that gives the area its name. The Māori word ‘piha’ describes the way water moves at the hull of a boat as it cuts through water, a perfect analogy to the Rock. Te Piha stands proud facing the ocean, cutting the beach to give two surf breaks in some pretty gnarly looking water. 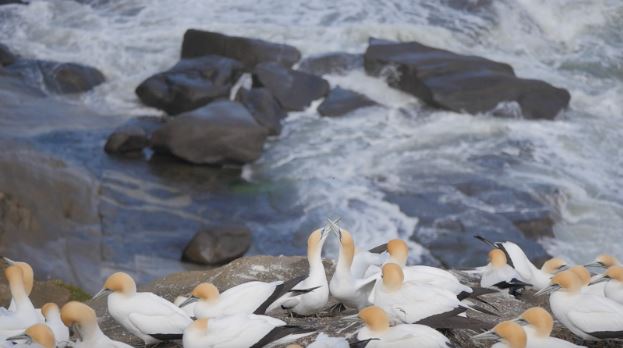 An hour’s drive north of Piha was the first pin in my Google Earth file ‘New Zealand Wildlife Destinations’, at Muriwai. A short distance from the car park up on the headland there are viewing platforms which are within and above a colony of Australasian gannets (tākapu), a species which is very similar in appearance to the northern gannets I have seen in the UK. The colony at Muriwai is self-established, beginning in the 1970s after overcrowding at the offshore islands of Oaia and Motutara forced birds to find another suitable nest site.

In September the Muriwai gannets are returning to this spot having spent the winter off the coast of Australia. Like pretty much all bird migrations, gannet chicks at Muriwai make this journey at the end of the breeding season without guidance from their parents, and won’t come back to New Zealand for a few years. In this time they kind of just do what gannets do - foraging, interacting with conspecifics, and surviving in one of the roughest seas on Earth. In this time they perfect their plummet, employing a deep U-shaped dive which allows them to catch up to 5 fish at a time (paper published in 2011, read here: https://www.int-res.com/articles/meps2011/442/m442p255.pdf ), and if they make it to the 30% that survive to breed they will head back to Muriwai to become parents themselves.

Muriwai is one of the three mainland gannetries in New Zealand with many offshore islands hosting the rest. Over 80% of the world’s Australasian gannet population breeds in New Zealand (the rest in Aus), and it was great to see so many of them at Muriwai getting ready to make their contribution to the population. Almost everywhere I looked across the colony there were pairs cementing their bond with their elegant rituals of bowing, bill fencing and mutual preening (as well as plenty of scrapping over nest boundaries). It was wonderful to be so close to the colony and sample what their life will be like for the next few months. There is something visceral about being in amongst a seabird colony - the cacophony of calls and smell of guano and salt in the air really bathe the senses, not to mention the hundreds of birds swirling in the air. From the observation platforms we could look gannets in the eye as they sailed past.

Spring is a great time to be a zoologist. It is also a great time for me to get out with my camera again after neglecting it for a year. The gannets of Muriwai were the perfect appetiser in what would be a true feast of wildlife. I’ll be back on the Cameron Bespolka Blog soon with glow worms in Part II.

Tomorrow I will have been in New Zealand for 6 weeks. 6 weeks. Time has raced by since …
read more

Saw Horse for School / 27.10.22
The Youth Naturalist Fund kindly helped me to purchase this sawhorse for my forest school site, …
read more