Young birder George Thomas reports on his experiences at the Bardsey Young Birders Week which ran from 17th-24th August. It is an annual event organised by the Bardsey Bird and Field Observatory. This was a fantastic opportunity for any young birder, ringer or just general wildlife enthusiast, as it was a chance to help out at the observatory and gain hands on experience at one of the UK's 19 bird observatories

Following the 48-hour delay due to stormy weather conditions, I finally arrived at the beautiful south end of Bardsey island ready to enjoy the Bardsey Young Birders week. 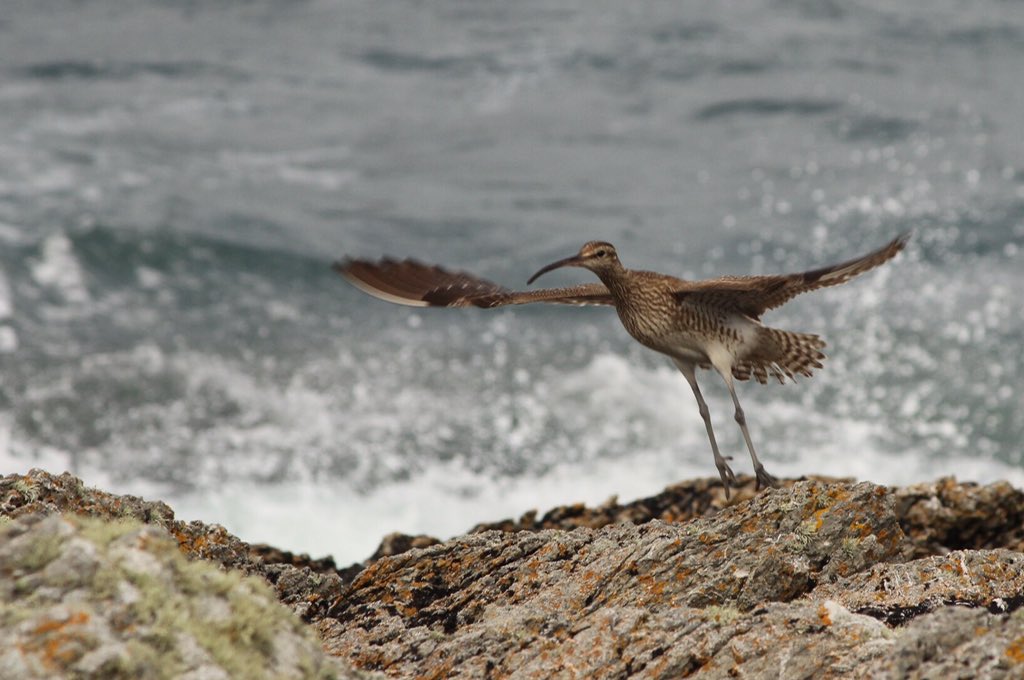 On cue, the island's Red-billed Chough were providing an astonishing sight, providing an excellent photo opportunity in the morning sun. From my frustration at the long delay in getting here to the sheer excitement at my first experience of staying in an observatory, where else other than Bardsey.

Once on the island myself and other young birders, took a walk with the observatory staff to the north end, getting to know one another. The day was ending but not before we finished with some late-night Storm-petrel ringing, where myself and others managed to see our first European Storm-petrel and I loved every second of it! 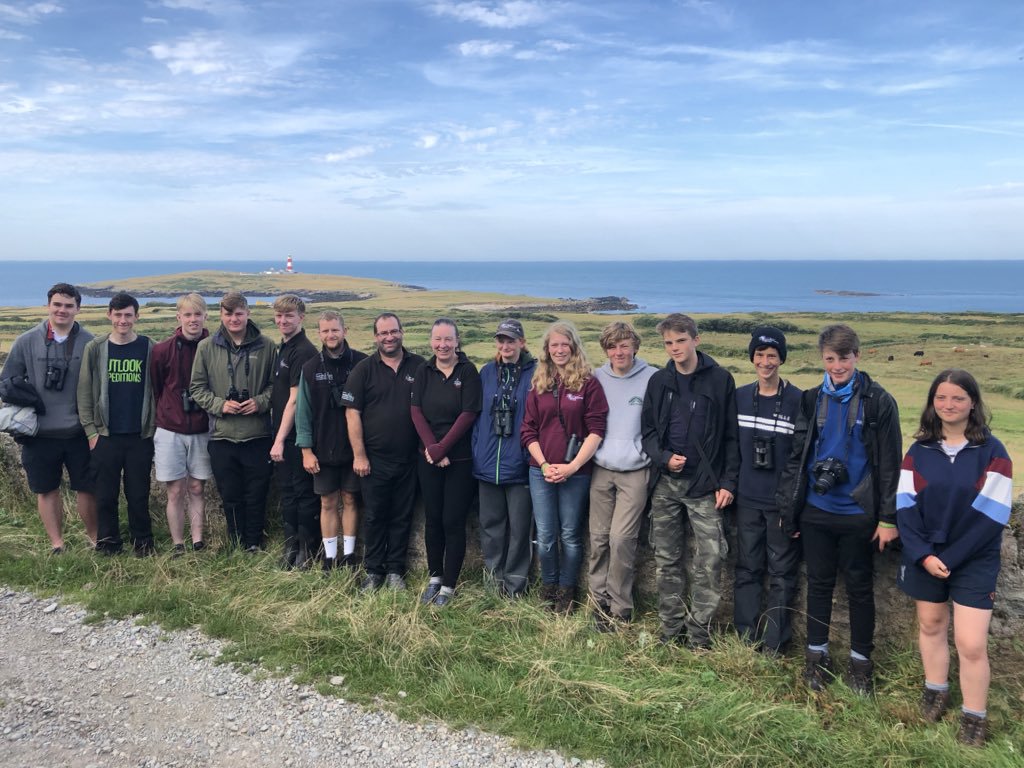 The young birders who enjoyed a week on Bardsey Island

Tuesday morning, I found myself narrowly missing out on a Fea’s-type Petrel. Every cloud has a silver lining and the mornings heartbreak provoked me to head out and get sea watching, sure enough I caught my first views of Arctic Skua – unforgettable! A quick dart round the south end produced a Purple Sandpiper, swiftly followed by out with the group ringing Manx Shearwater chicks. It was my first experience ringing and carefully extracting the mauling fluffballs was truly rewarding! I really enjoyed this experience, the highlight of the trip being up-close to a bird I don’t regularly see. Then after a hard day’s work, you could sit back and relax with like-minded young people in Log. Its been thanks to doing log each evening that every day, I’d go out counting every bird I saw from the Northern Gannets shearing the Irish sea, right down the Eurasian Wrens sulking in the south end gorse. Once the days Log was done and dusted, we’d head out and get ringing the adult Manx Shearwater as night fell. I was amused at how easy it was to simply pick them up off the ground, showing little if any resistance, well, until you were holding them holding them, at which point a severe manxie mauling was delivered! 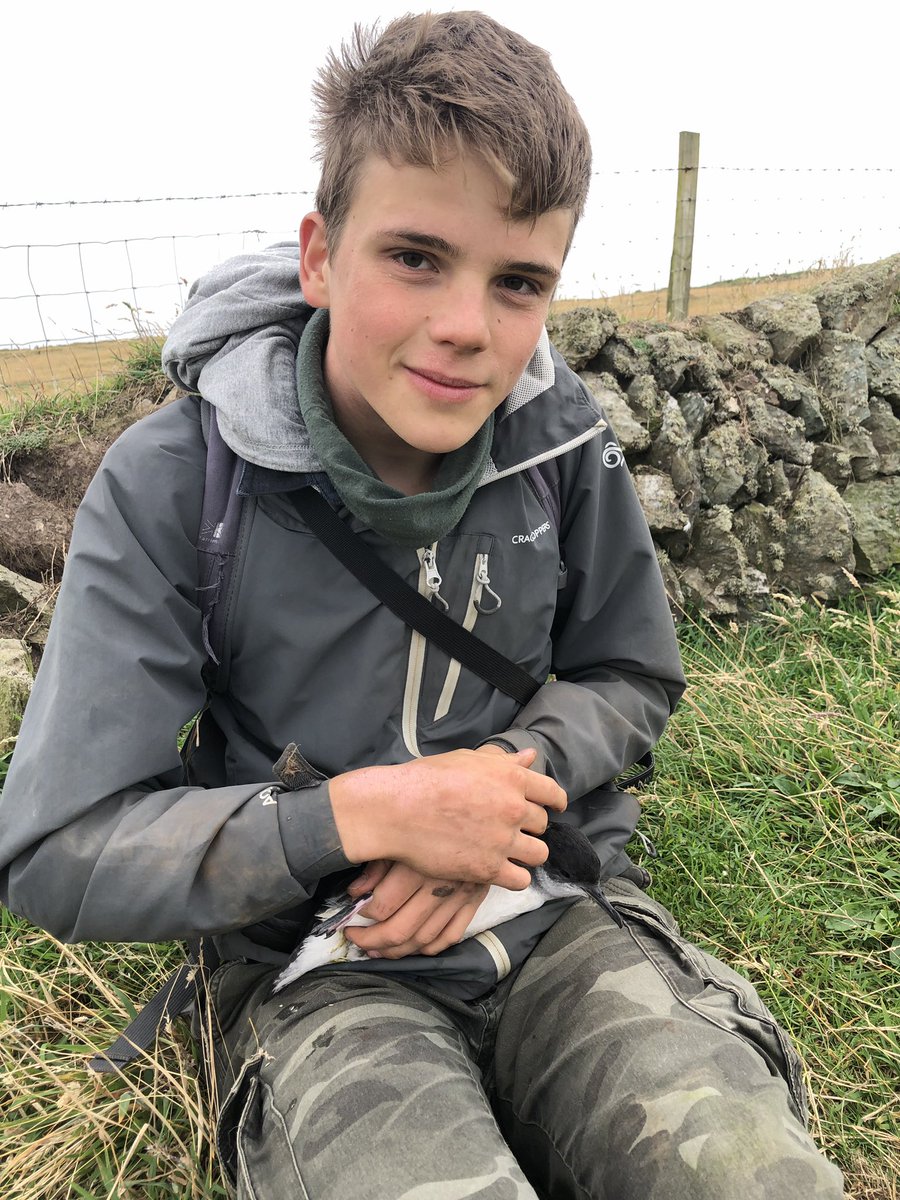 Wednesday – Rock Pipits! The highlight of the day was going out with the group ringing the large pipits down on the beach, making them my second species for the ringed list. Afterwards I went for a hike up the Mountain in hope of photography Red-billed Chough and my expectations were well and truly met! I got fantastic views, my best yet with the backdrop of Snowdonia providing a priceless background. At this point it was calm before the storm, perhaps it won’t just be the weather spicing up – rarity?

Now on an early Thursday morning, I caught sight of a pristine winter plumaged Common Guillemot in atmospheric viewing conditions, high winds and choppy waters. Despite this, there wasn’t much of interest, so I decided to join a group for more ringing of the islands Manx Shearwater chicks which was followed up by the night’s entertainment – bird quiz! Again, followed by a nights ringing and again, I loved getting up close and personal to this species. 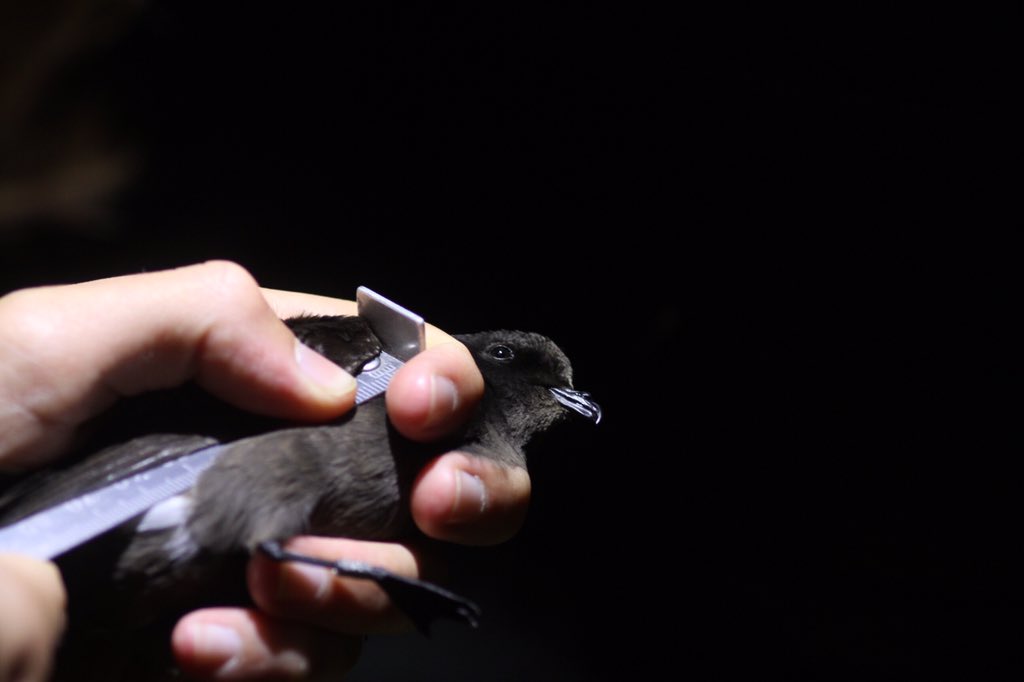 Our time on Bardsey was ending and Friday brought on the Bird Race, my first! The young birders and staff split up into three teams, attempting to out compete each other by logging the most birds in the day. To make an attempt to gain an early lead, my teammate Joshua Hill and I got out for 6am for a sea watching and scanned the whole island before 4pm. While hunting down some Purple Sandpipers, I realised the physical excursion from running around and getting all giddy go to me. After a short break at the obs, Josh and I headed out to Nant to try out Little Owl for the fourth time of the day at finally…result, Little Owl! We briefly saw and adult then heard a juvenile calling. So, when it came to log despite our best efforts, me came second from top only by two species! That night, out last, we went ringing the islands European Storm-petrels one last time wow what a trip, reflecting back on the life changing experience in the company of some great people in a beautiful location. 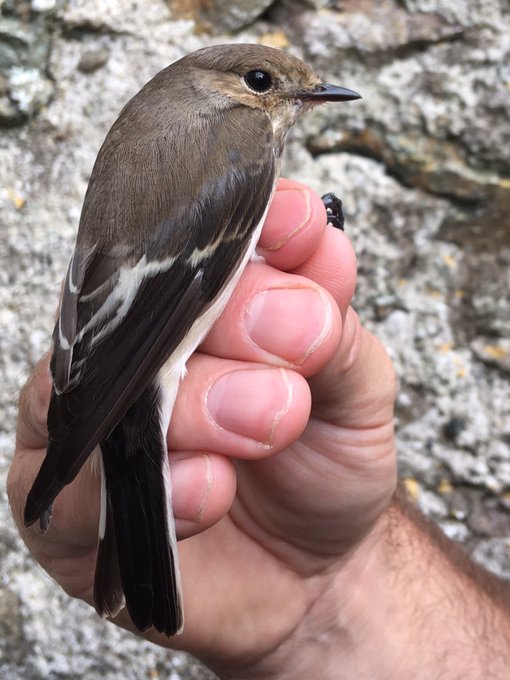 As the sun broke through Saturday morning, we had little time to take in our final moments of Bardsey, before we had to back and prepare for the boat back to the mainland. Sadly this time round, no bad weather to trap us on the island for another week.

I loved every second of the week, it's shown me ways in which I can become more active in my interest in birding for the future. Thank you so much to the BTO for supporting me in doing this and to observatory warden, Steve Stansfield, for organising this fantastic experience.