And 6 days 15 hours and 22 minutes later, they arrived in Annapolis, Maryland! by Corinne

It's Always Darkest (and Wettest) Before the Dawn, by Mark Colman with video from Adil Qureshi

Virginia here we come by Corinne and photographs by John Rennison

This is for the Birds by Marc Christensen

It's Always Darkest (and Wettest) Before the Dawn, by Mark Colman with video from Adil Qureshi

The last shift of riding before the team's arrival in Annapolis was pretty miserable. Tensions were already high as one van went off course by 20 miles due to a broken iPad and missing the route changes necessitated by a closed bridge into Pennsylvania. After reuniting the vehicles and 4 riders about 10pm, the rain started to fall. We were hoping to avoid the aftermath of Tropical Storm Cindy, but to no avail. Near the Gettysburg memorial site, the rain got heavier and was driving sideways. Soon it seemed like the headwinds were 30mph and deep puddles were forming on the road, causing us to slow down and be less aggressive in racing. A crash at this stage would have been unforgivable. Take a look at Adil's video clip to realize how truly awful the weather was. But with only 150 miles of riding left to the finish, we just had to push through, and the remaining 8 hours seemed like eternity. I changed socks 4 times, which was pretty pointless since everything got soaked as soon as you got on the bike.

Thankfully, dawn broke on Saturday with a beautiful clear sky as the entire team of 8 riders met for the parade style escort to the RAAM finish, but that's another post. Before that, it's time for the finisher's banquet! 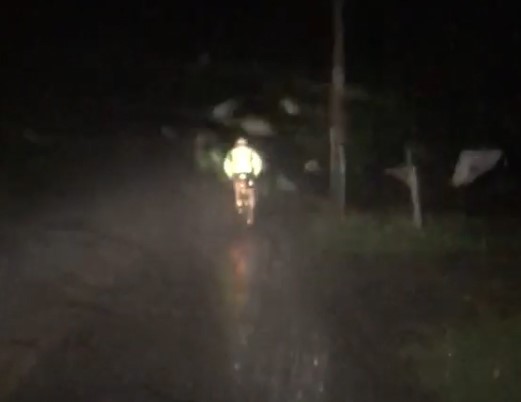