After a long absence during Lockdown I have decided to restart blogging, partially because I know have something to write about. So, let’s see how this post turns out. Stay tuned for a trip to the Wiltshire, Dorset, Hampshire Border.

Saturday morning was gloomy and grey with the odd burst of heavy rain and so I was rather reluctant to head out, but after lunch I decided to head to the furthest reaches of Dorset to have a socially distanced birding trip with Alex Chapman a good friend of mine.

I set off at just after 1pm with the ever-changing pattern of clouds behind me. Now the first sighting of the day was whilst I was just leaving Bournemouth on the A338. By the Junction for the airport just before the change in speed limit there is a large area of pines and to my surprise as I was passing a flock of 30 – 40 large finches were circling the trees and giving the influx and the fact that I have seen some big flocks locally I am pretty sure they were Crossbill. Turning my attention back to the road it wasn’t long before I was ‘zipping’ down country lanes in the middle of what felt like nowhere, with some incredible scenery all around. There are some stunning places in this part of the county.

Eventually at just after 2pm, and after having narrowly avoided being crushed by a massive combine harvester, I arrived at RSPB Garston Wood. As I opened the car door, I was immediately greeted by the sound of a Marsh Tit and sure enough there was one feeding in the tree right above where I had parked. It was making that noise that I tend to associate with Black-capped Chickadees in the states and was busily picking insects up from the underside of the leaves as it moved through the canopy. Incredibly this was my first Marsh Tit since last visiting here in May 2016. A species I really don’t get to see all to often.

Once Alex had arrived, we set off into the woodland. The first few rides we came to were full of Meadow Browns, but not the hoped for Dark-green Fritillaries. Blackcap and Chiffchaff sang in the woodland around us as did the Robins and Wrens. Skylarks could also be heard singing from the nearby fields.

​A wrong turn accidently took us out of the reserve and into a nearby field, however this proved a good mistake to make as on the way back into the reserve we spotted on of the best Beetles I have ever seen in the UK. It was almost like a stag beetle except it had an iridescent Blue ting to it. I had a funny feeling it was a species of Carabid and sure enough it was. Infact this species is rather interestingly called Carabus Problematicus, presumably due to the fact that it was thought to be a species of a similar looking Beetle called a Violet ground Beetle, before being split. This species is also interesting as its actually a nocturnal species of Beetle tending to hide under logs and stones during the day. What an incredible Beetle Problematicus is and what a name it has too! 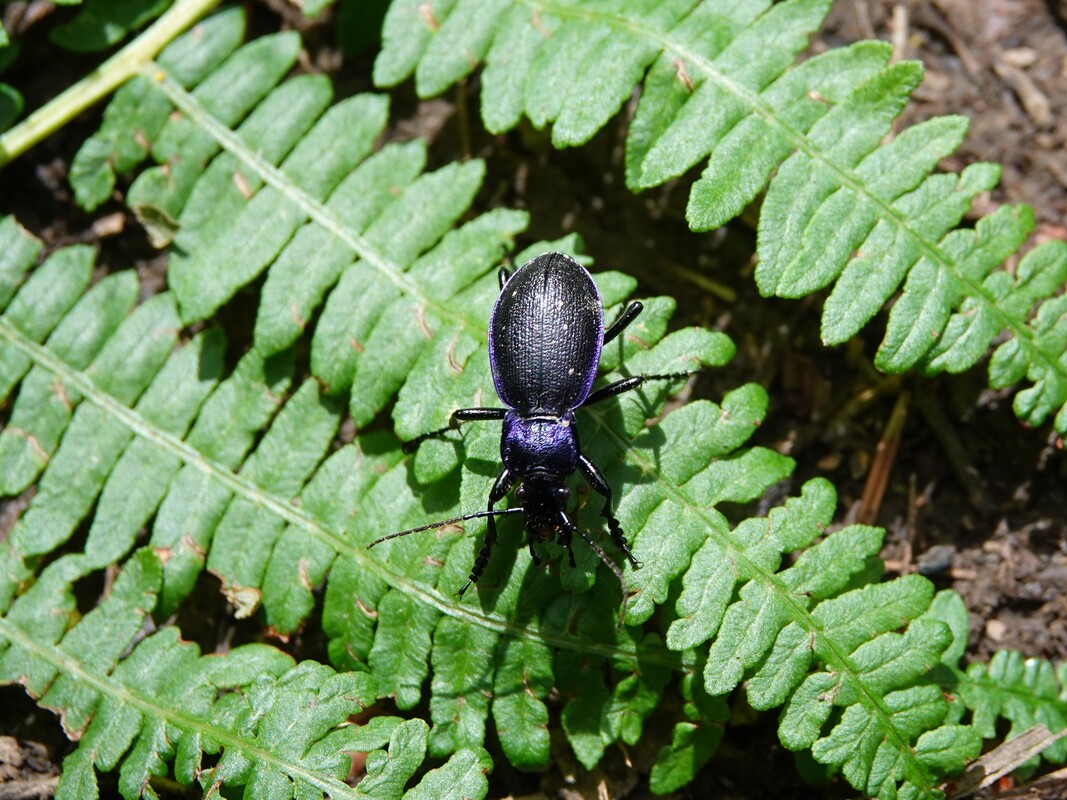 ​Back into the woods we went and soon we had found another pair of Marsh Tit feeding right up close to the path alongside a rather scruffy Blue Tit. We managed to get some incredible views of them better than I have ever had before. 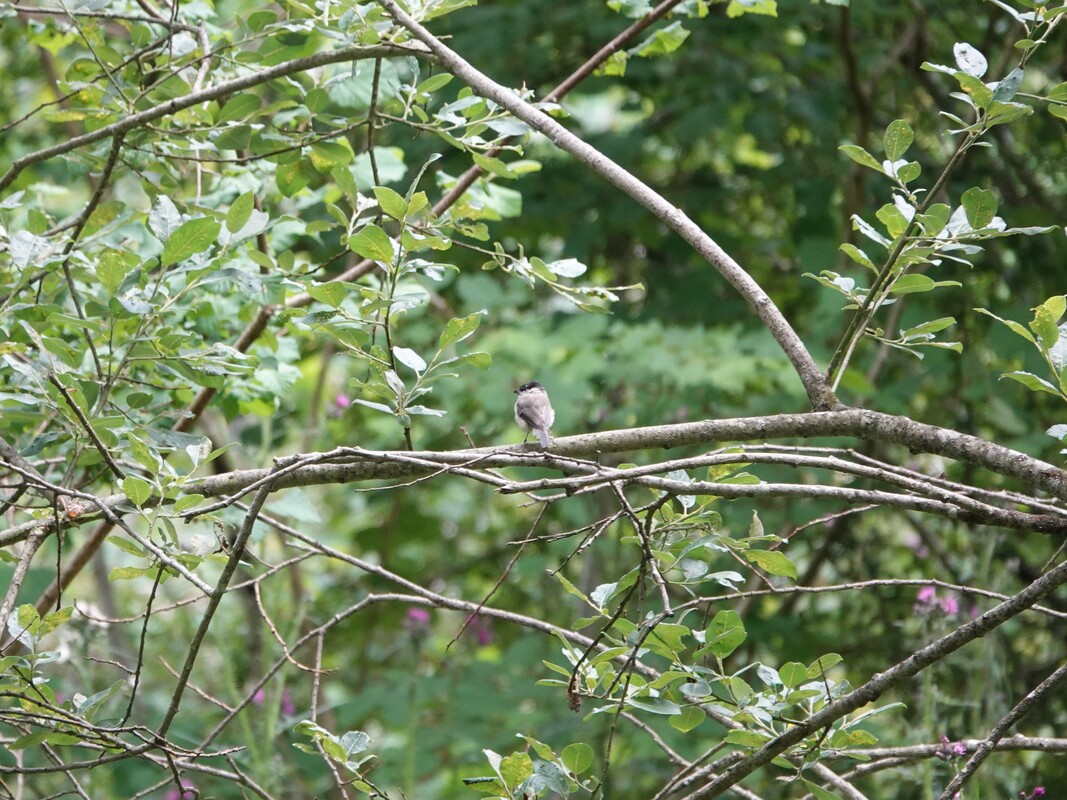 ​We continued further into the reserve and came to a large ride. Wow, the bio diversity was incredible. Given that it was a sun trap our butterfly list rapidly increased adding Ringlet, Large White, Red Admiral, Peacock, but more importantly several White Admirals and Fritillaries. Now I was pretty certain at the time that the Frits were Dark-green however looking at the photos (which aren’t the best) I am starting to think they may have actually been silver-washed. Now I am assuming for someone that isn’t colour blind the Fritillaries are all different colours, but to me they are all the same shade of light green so any help would be gratefully appreciated. The Butterflies weren’t the only things that were enjoying the ride there were plenty of Marmalade Flies as well as plenty of Buff-tailed and Red-tailed Bumble Bees. Oh, and a several Carder Bees.

​Deeper into the woodland we went to the sound of Treecreeper and then a familiar call caught my attention. Eventually I spotted the culprit flycatching above us in the trees. It was of course a Spotted Flycatcher and there wasn’t just one but a pair busily catching insects and attending a nest that was just out of view from us. This wasn’t a species that I had expected to encounter today, but by chance we had stumbled across them in what I guess is the perfect habitat for them. 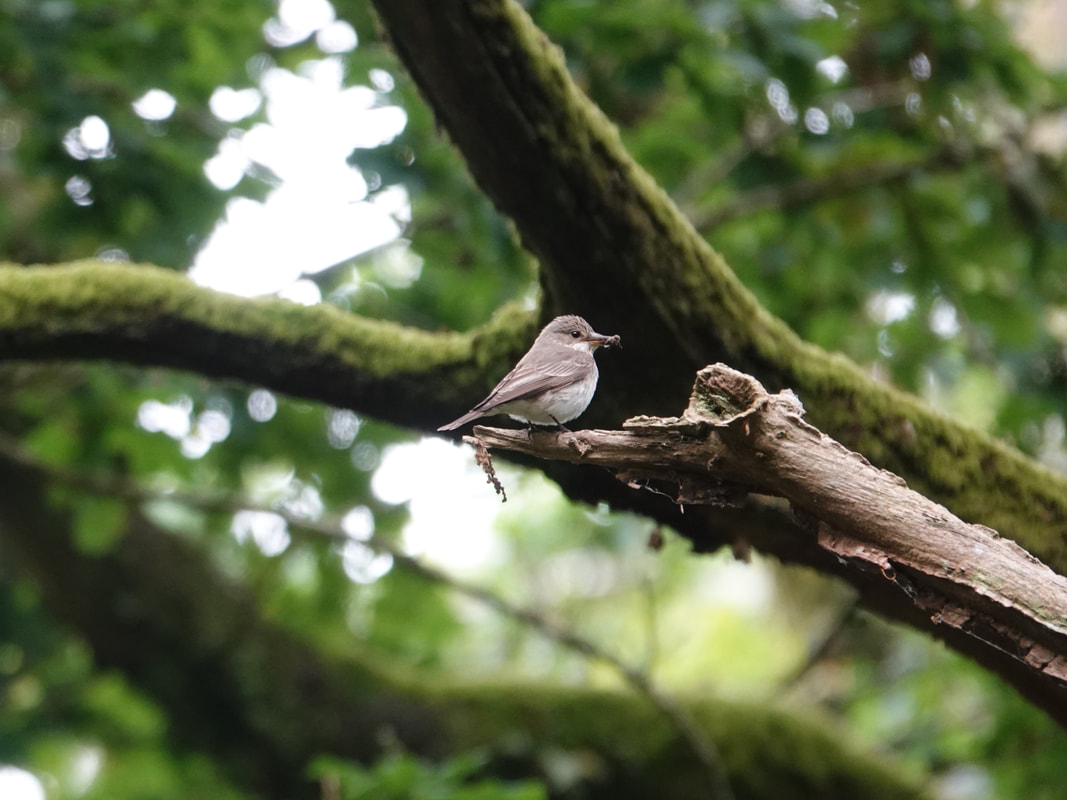 ​Moving on we headed back towards the car park passing another Marsh Tit and the first Great Tit of the day. House Martins were also feeding above the woodland. Holly Blue was the next butterfly to be added to the trip list as was small white. Then perhaps one of the find of the day appeared on the Bracken next to us. A Scarlet Tiger. What an incredible Moth they are, another new species for me! 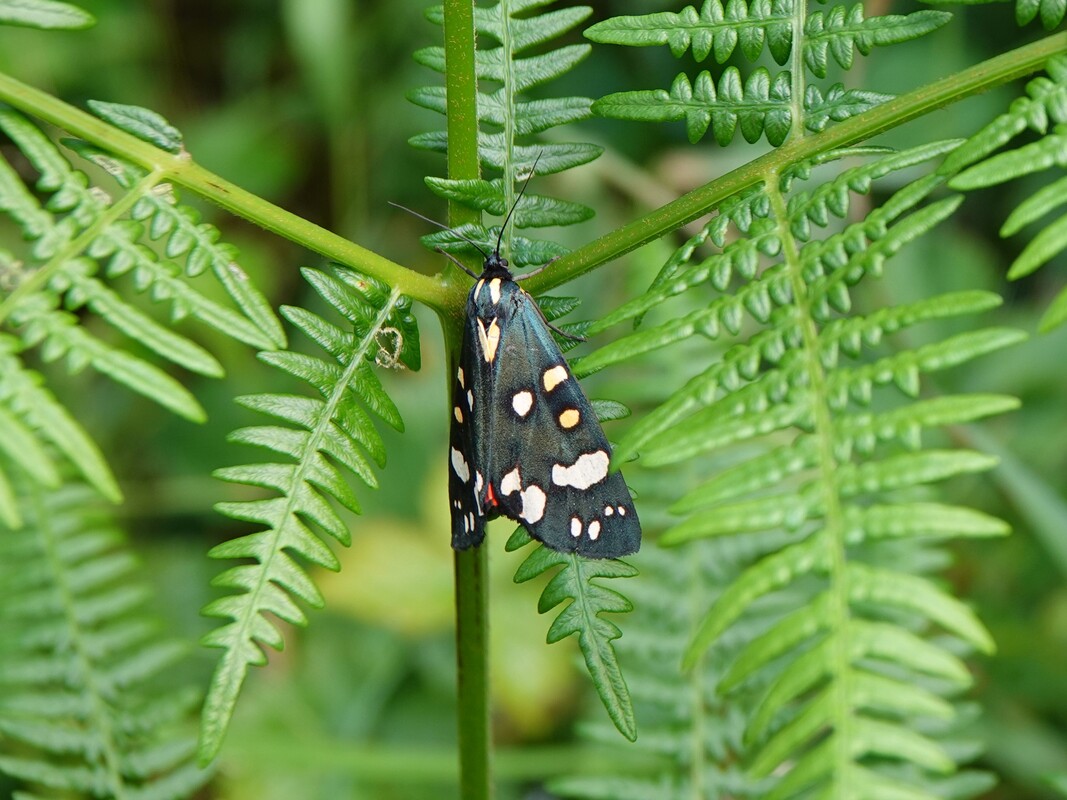 ​After the success of our first stop we decided to go and try our luck at a spot that Alex had visited the other day just over the border in Wiltshire called the Ox Drove. As we pulled up and headed down this country lane it was an incredible site. You can literally see for miles either side almost as far as Bournemouth to the South and Salisbury Cathedral in the North, with the crisscrossing countryside in between. Honestly the whole way down that track it was truly breath taking. A family of Stonechat were in the brambles at the beginning of the track with Yellowhammer and Skylark singing all around us and a Raven trundled trough overhead. The first few Gulls of the day flew over with both Black-headed and Herring.

We then reached a set aside field where Alex had recently had some luck although when we arrived it was unfortunately empty. A Red-legged Partridge and a few Common Whitethroat were our rewards or so we though. But then the low flying of both Red Kite and a Common Buzzard set up a flock of 32 Lapwing and 10 Starling. The Lapwing flock was a mix of both adults and freshly fledged Juvs a sight to see as they twisted and turned in the wind.

​We decided to head back as we had one last stop on our list. Along the way back to the car we found a pair of Marsh Tit feeding close to the path doing that chickadee like call. Just incredible. To think that we had now seen 8 birds in just a few hours, that more than double the amount I had seen in my life before that. Swallows and Swifts were extremely low flying; however, the highlight was a steam vehicle that was trundling down the country lane before eventually grinding to a halt as it had a leak. What a sight in such an amazing location. I honestly can’t recommend this area enough.

​Moving on we headed back into Dorset and then over the border into Hampshire. The site we had in mind is perhaps one of the best in this area for ancient grassland species. Infact the species that live at this site are in huge declines elsewhere however here they are thriving.

So when we arrived at Martin Down it was no surprise that when we got out the car we were greeted with the song of both Skylark and Yellowhammer. The next two and a half hours were incredible. How we spent that much time out there is beyond either of us, but it was definitely worth it. We hadn’t gone far up the first track when we spotted a new Butterfly for our list in the form of Marbled White and this was shortly followed by another Frit which I think was Silver-washed, however I am told Dark-green are also common here… Both Large and Small Skipper were found, but not Silver-spotted. Before we set about trying to ID Essex Skippers, we were rudely interrupted by a purring Turtle Dove in a nearby bush. Honestly, I don’t think either of us could have been happier as over the next 10 or so minutes we watched as the Turtle Dove performed exceptionally well for us both singing and in display flight. They are such remarkable things. 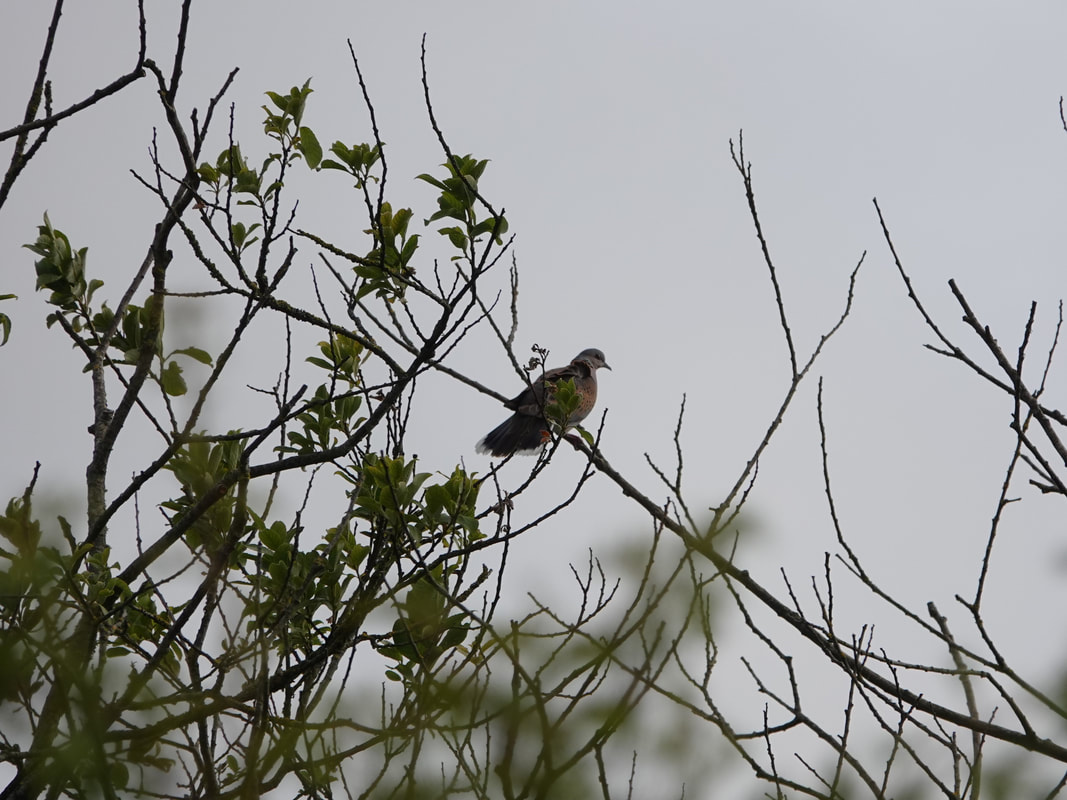 ​Moving on to the sound of Blackcap, Whitethroat, Yellowhammer, and Skylarks. I mean I honestly don’t think I have ever seen or heard so many Yammers or Skylarks before in my life. There must have had to have been up to 50 odd of each and this is ‘off peak’ time for both. Several pair of Stonechat lined an embankment and Orchids were everywhere with both Common Spotted-Orchid and Pyramidal Orchid’s seen.

​Moving further on into the rough grassland and soon the jangling of Corn Bunting filled the air from ever corner of the field along with the constant calls of Linnet, Yammers and Skylark. It was incredible. I have never seen Corn Bunting away from Rainham Marshes before and have only seen a handful there, but this field had more than 20. It was incredible they and the Skylarks were literally everywhere you couldn’t escape them. 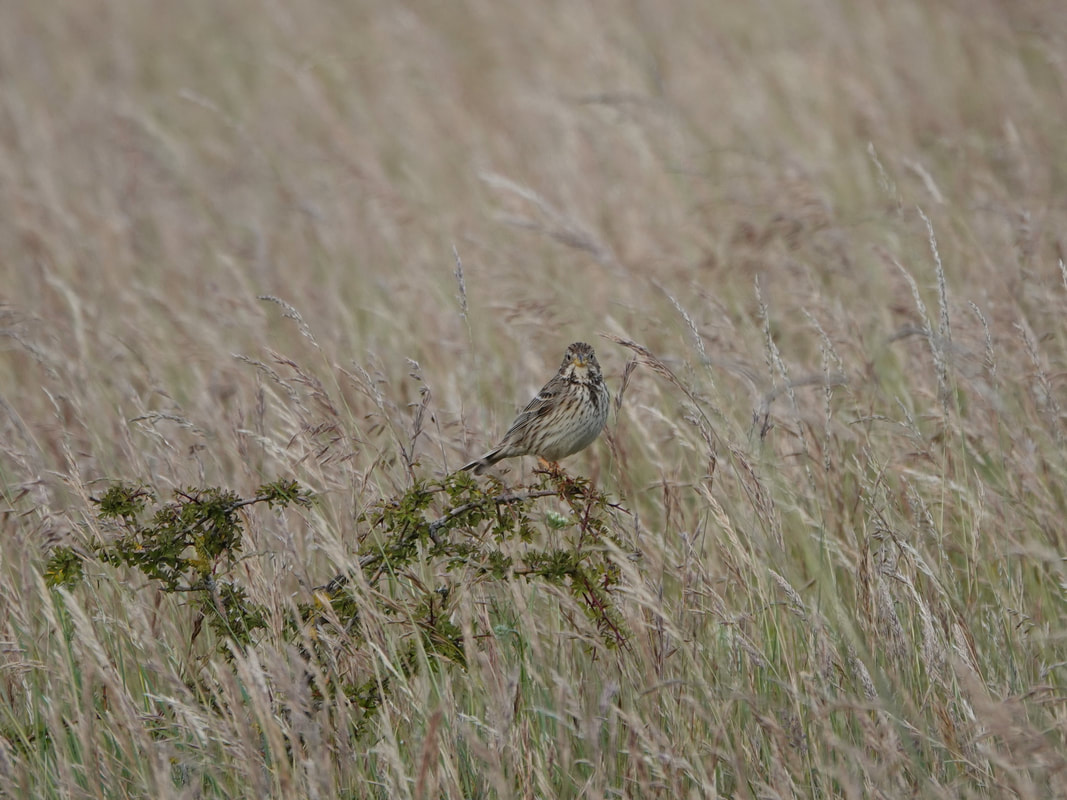 ​All of a sudden, we realised that it was almost 8pm so we decided to head back to the car park via a last-ditch Hobby and a ticking Lesser Whitethroat. Just incredible. I honestly can’t recommend this area enough, especially if you want a taste of what the countryside would have been like whilst it was intact. The fact of the matter is that the main species we have saw today including Marsh Tit, Yellowhammer, Corn Bunting, Skylark, and Turtle Dove have had dramatic declines since the 1970’s and one day we may lose some of them for good if something isn’t done to change that. If more areas like the ones we visited today, with scrubby areas and rough chalk grassland are made then It won’t just be the birds that benefit, but it could also be the Butterflies that benefit too. Infact some of the UK’s most iconic butterflies’ species have also suffered huge declines so now more than ever we need to help look after and protect these last remain havens for wildlife.

Today has reminded me of what I enjoy so very much. The heading out and exploring and not knowing what was going to be next and as I headed back to Bournemouth, I reflected on what has been an incredible day’s wildlife spotting.

I wonder where my next adventure will be too…?