This post is about the week London was declared the world's first ever National Park City, a designation encouraging cities to become greener, healthier and wilder.

At the VIP room a few floors above, I was introduced to people from all aspects of the campaign: Ebs Akintade, TV presenter and broadcaster, Princess-Joy Emeanuwa, young nature enthusiast and ambassador for Action4Conservation, Marianella Cervi, head of Timberland's sustainability programmes, Feryal Clark, deputy mayor of Hackney, Kobie Brand, director of Local Governments for Sustainability's Cities Biodiversity Centre, Shirley Rodrigues, Deputy Mayor for the Environment and Energy, and the Mayor of London, Sadiq Khan. 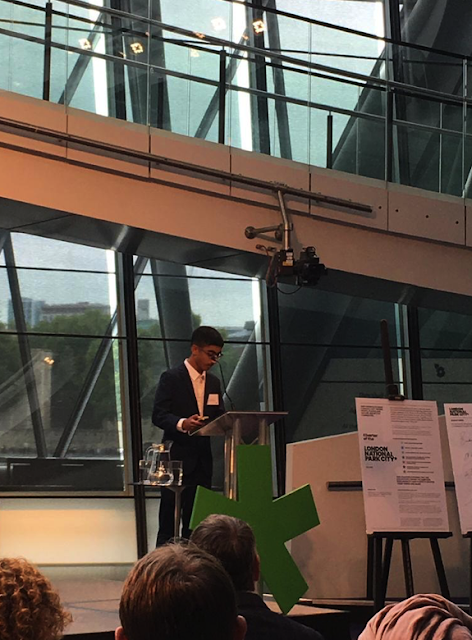 Speaking at the Summit at City Hall

At 10:00 we walked into City Hall itself, which had a very long spiral staircase winding upwards to a viewing area, where we would have lunch. Ebs welcomed us all to the event, which was followed by a history of the National Park City campaign from Dan. Sadiq Khan then gave a mayoral address, praising the work of the campaign and the steps we should take forward after the declaration. The rest of the morning was packed with talks given from a range of organisations from London and beyond, such as National Geographic, Hackney Council, Charlton Manor Primary School, Timberland and Heston Action Groups, which I thoroughly enjoyed. It was a great honour and a privilege to speak there myself, representing the Cameron Bespolka Trust. My talk was about how we can all see London in a completely new way, by protecting and enjoying the wildlife on our doorstep. All the speakers got to sign the National Park City Charter, which was very exciting! 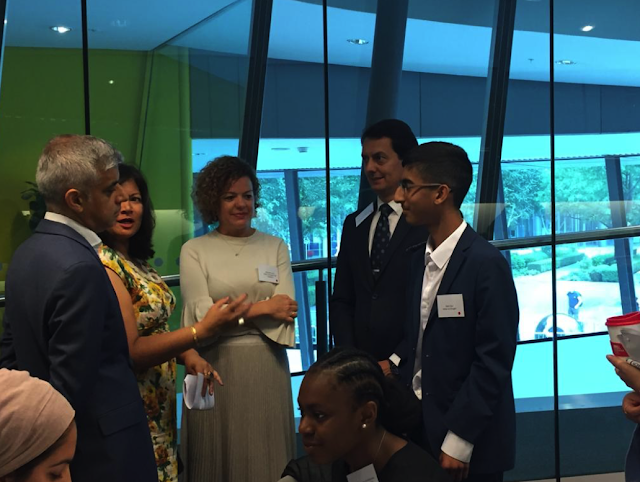 Lunch took place at the very top of the building, where I met many more people from different organisations across London, all making the capital a better place for everyone. I was also given the opportunity of a short interview on the viewing platform, where I was asked about how I think London's wildlife would be affect by the designation, particularly migratory birds.

The afternoon was mainly discussion panels, in which a large range of organisations participated in, including the Greater London Authority, Wild in the City, the Ramblers and Glasgow National Park City.

I had a wonderful time at the Summit, meeting and hearing about so many amazing people and organisations, who all have a massive influence on the capital, and I am very grateful to have seen London being given this amazing designation.

24th July 2019
On Wednesday, I visited a number of places around the capital, one being St Pancras Square, King's Cross. Taking place there was one of National Park City Week's flagship events. The London National Park City Photography Competition. There were many beautiful and entertaining photos of Foxes in Lewisham, Red Deer in Richmond Park and even a white Squirrel in Tooting! I was lucky to be a finalist myself, with my photo, 'Rainham Robin', taken at RSPB Rainham Marshes. 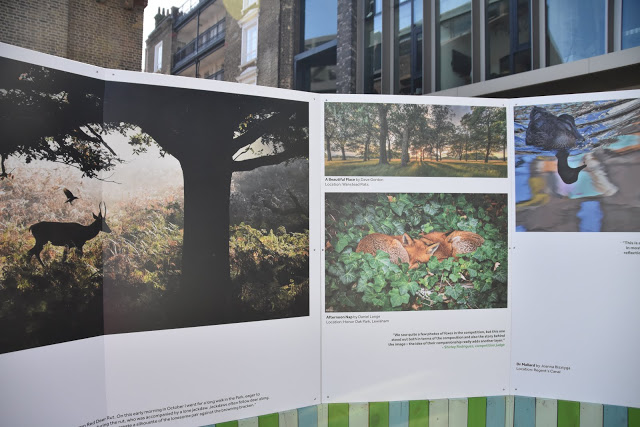 Photos from the competition 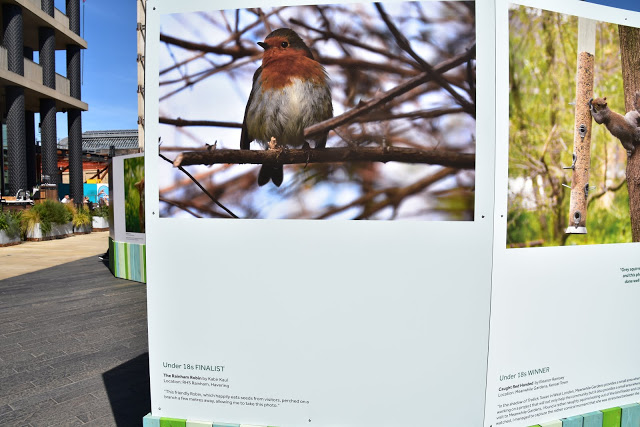 I then headed to Noel Park in Haringey, where I met Luke Newcombe, a wildlife gardener and head of GrowN22, an organisation transforming the N22 postcode into a sustainable, green environment. He showed me around his fantastic nature reserve, Westbury Banks, which is within minutes' walking distance from Turnpike Lane Station. The reserve is an oasis for the wildlife of Wood Green, with many species of butterfly such as Red Admiral, Comma, Ringlet, Gatekeeper and Brimstone, and I also saw my first Jersey Tiger Moth there too! Luke told me about the many challenges he faces in the nature reserve, which has inspired me to become more resilient and resourceful in my own garden, and was fascinated by how the reserve gets children involved with practical work as well. He showed me many aspects of the reserve, including a tree avenue, fox runs, bug motels and a wildlife pond, which is flourishing. I look forward to help design and build the reserve's bird hide with Luke and the reserve's volunteers in the near future, and I can't wait to visit again soon.

26th July 2019
On Friday I decided to visit a local site in Hillingdon, called Gutteridge Wood. Managed by the London Wildlife Trust and within the Yeading Woods Local Nature Reserve, the woods provide a habitat for Squirrels and Roe Deer, and the Yeading Brook, a tributary of the River Crane (which flows out into the Thames at Twickenham) is home to Frogs. Families of Squirrels can be seen playfighting, and virtually dominate the treetops. Unfortunately, the Yeading Brook had dried up in places, which was a very worrying sign. However, butterflies thrived in the adjacent meadows. In the coming months I hope to visit this reserve again, a hidden gem right on my doorstep! 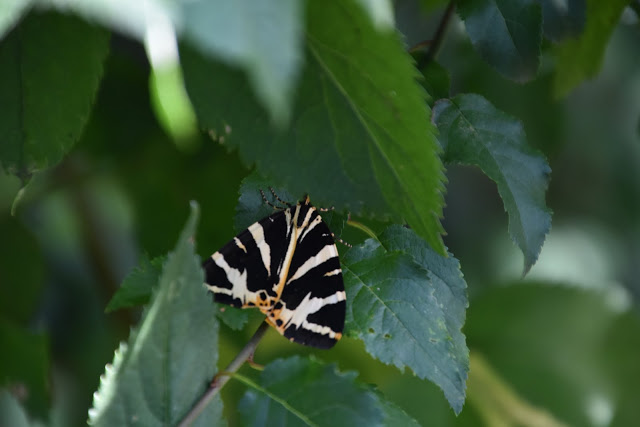 27th July 2019
To end this spectacular week, I visited a more unusual designated site, a Site of Importance for Nature Conservation (SINC) directly opposite Wimbledon Common. Wat Buddhapadipa, or the Thai Temple, is a magnificent Buddhist temple in Wimbledon, and is not the first place people think of when watching wildlife in London. the temple grounds are filled with the song of Blackcaps, Chiffchaffs, Treecreepers, Robins, Blue Tits, Goldfinches and many other species. There is a small woodland, with Barn Owls, Magpies and Squirrels, and a tranquil lake, where Mallards, Moorhens and even Herons can be found! 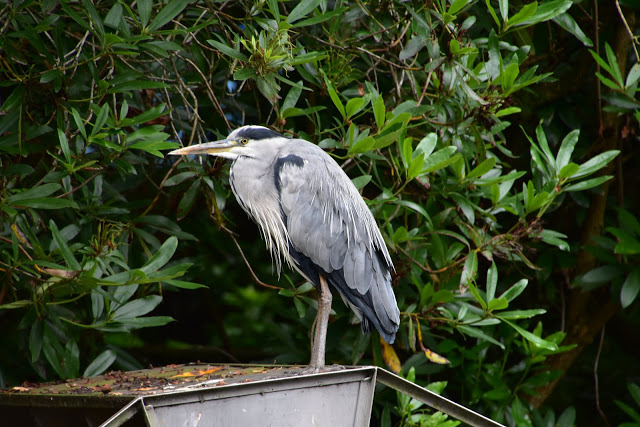 A Heron standing still on the lake's waterwheel

The visit to the Temple provided a superb ending for a historic week, and in the weeks, months and years that follow, everyone in London and beyond should be encouraged to make life on the capital greener, healthier and wilder for all.